All lists in alphabetical order:

SPECIAL THANKS to Linda Burfield, who selflessly manned the book table for the first five seasons. Also to Frank Beltrano and Andreas Gripp for suggesting the Mykonos Restaurant as our venue, as well as help on a host of other issues.

​﻿﻿﻿﻿﻿I was raised on a small farm in central Alberta. My first ambition, a very serious one, was to live alone in a log cabin and be a trapper. That changed to farmer, then biologist, then journalist, then florist.

I studied biology and journalism at the University of Calgary and Mount Royal College and worked as a reporter for The Calgary Herald and an Alberta Report newsmagazine.

Then, over four years, I went on some extremely long, arduous  adventures, hoping they would break me out of my life-long shyness and anxiety. No such luck. So, having read that poetry was a possible route into the subconscious, before heading home I camped in a closed provincial park for a month and a half, reading, writing and memorizing poetry until it floated across the sky in my dreams. It got me heavily into poetry, but not out of my anxiety.

I married and my wife and I opened and ran a flower shop in Vancouver for nineteen years.

We sold the shop and, semi-retired, moved to London, Ontario in 2008 to be near our children and grandchildren.

With more time on my hands, I revved up my poetry writing, and, as a form of shyness therapy, began attending Ron Stewart's excellent poetry workshop. There I met Martin Hayter and Erik Martinez Richards. Martin's work as a psychotherapist was impinging on his attendance, so the three of us formed our own little weekly workshop.

Returning from a reading/open mic in Sarnia, we wondered why there was no open mic (except the slam ones) in the much larger city of London. I was the only one who had the time to do anything about it, and, as I began to research it, I thought maybe this could be the perfect therapy for my shyness.

Sure enough, as the work of organizing it began to involve others, at first only by email and phone, then in person, my fear seemed to disappear, replaced by practical work. Doing things with others. Necessity. After 62 years, I felt like I was stepping through a door into a completely new life. Now it's not just me thinking by myself, but a number of us meeting together all talking at once, working things out as a group. Astonishing.

Talents? Everyone has a talent, right? Well, as a poet, I'm amateurish. Social organizer? Are you kidding! No, I have only one real talent: I can analyze dreams like crazy. When I tackle a dream, all the best parts of me work together at 100% of capacity. In those moments, I'm like an athlete on a ski slope. Which is really sad -- to be talented in something of so little use. (Anybody have any hard-to-figure dreams? Please? For a poor starving soul?)


I live on the eleventh floor of an apartment building:

At the bottom I start again

lift myself, glance up.
And try to peel away
all those things I've always known--
the objects, their dryness, their hold,

even touch those
old splashed years--
scrabbling after
some other life.

But now I've decided it's
next foot above the last--
sadness, now relief--
my muscles, my joints, my eyes open,

my own solid walls moving past. 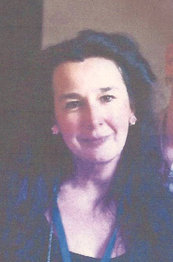 ﻿﻿﻿﻿Beginning in London Open Mic's third season,  Joan Clayton is one of the event's co-hosts (the other being organizer Stan Burfield). During the first two seasons she was a regular open mic reader.

Dr. Clayton is a clinical psychologist in private practice. She began writing creatively ten years ago. She has had seven plays produced, and several poems and articles published. Joan thinks of herself as a story teller and enjoys the research behind many of her productions, the most recent being ‘The Power of Work’ for Goodwill Industries which told the history and future vision of Goodwill International.

She received the Kobzar Scholarship to attend the Humber Summer Writers Conference in 2012, and last fall received funding from the Shevchenko Foundation in Winnipeg to publish a children’s book on the Ukrainian Genocide of 1933, the Holodomor.

Joan Clayton’s first shot at hosting London Open Mic will be Oct. 1st, when Roy MacDonald will be featured. MacDonald will be introduced by London Town Crier Bill Paul and warmed up by the music of Jef-something Brian Thomas Ormston. 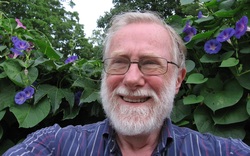 ﻿Strathroy resident Frank Davey, a fellow of the Royal Society of Canada, grew up in BC and  studied at UBC where in 1961 he co-founded with George Bowering and Fred Wah the influential and contentious poetry newsletter TISH. His first volume of poetry, in 1962, was described as ‘the act of the moment’ rather than poetry as the commonplace attempt 'to express  feelings.' In 1965 he launched the avant-garde poetry and criticism journal Open Letter, and,  with the assistance of bpNichol, developed it into what many still see as  Canada's most important  forum for discussion and examination of innovative and experimental ideas and texts.

In Sept. 2014, Davey was honoured by his peers at the University of Western Ontario who elected him a fellow of the Royal Society of Canada, the highest honour a scholar can achieve in Canada.

The Royal Society said Davey "is an internationally recognized scholar and a leading figure in exploring alternative and experimental theories of Canadian literature. His critical studies have transformed our understanding of language and discourse in the study of Canadian texts. Professor Davey’s sustained efforts – as critic, theorist, editor and poet – to enlarge and redirect Canadian literature studies have been essential contributions to its contemporary diversity and self awareness."

Davey obtained his PhD from the University of Southern California in 1968. With the encouragement of George Woodcock, he began writing literary criticism, a body of work from the 1970s to the ‘90s which would be described as 'the most individual and  influential ever written in Canada.'

His most important early contribution was his withering 1974 critique, Surviving the Paraphrase,  which discredited thematic  criticism in Canada, including that of Northrop Frye, D.G. Jones and Margaret Atwood.

From 1975-1992 Davey was one of the most active editors at Coach House Press. In 1984 he co-founded the world’s first on-line literary journal, Swift Current. In 1986 he became the chair of the English Department of Toronto’s York University, where he quickly assumed a nationally influential role. Then, in 1990 Davey came to London, where he was appointed to the Carl F. Klinck Chair of Canadian Literature at UWO. Here he began a new writing phase involving analysis of various Canadian cultural scenes—from literary  criticism to politics, celebrity, and popular crime  writing. These studies have given him much fodder for his poetry.

Over the years, the stance Davey has taken in his criticism has occasionally put him into conflict with the Canadian literary establishment. For example, he has described Canadian literary and academic prizes as institutional rewards for 'banality and careerism'. On the other hand, he has often been seen as a 'poet’s poet'.

Through his books of poetry, his literary and  cultural criticism and his rich range of essays on diverse topics, Davey has been a major figure in introducing the idea and practice of postmodernism to writers in Canada.

So far Davey has published 27 books of poetry, six since 2000, the latest being ‘Spectres of London, Ont’ (2012). He also has numerous non-fiction titles.

Amongst other endeavours, Davey is currently posting on Frank Davey Blog, which is hosted by London Open Mic Poetry Night.﻿ 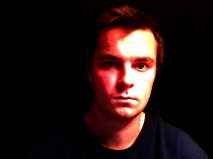 ﻿Kevin Heslop is a twenty year old writer-in-the-making, currently attending Western University as an English major. He is heavily influenced by the poetry and prose of Charles Bukowski and Ernest Hemingway, the philosophical works of Arthur Schopenhauer and Friedrich Neitzsche, the paintings of Vincent Van Gogh and Pablo Picasso and the music of J.S. Bach and Miles Davis. When not reading or writing, Kevin is either playing the drums, drawing with an 8B pencil and/or feeling distressed about not writing, at which times he often waits patiently in...

the flannel blanket is thin and grey and tossed and disheveled lying
weeping upon the wooden chair with one shorter leg.
two blue garbage bins with crooked headpieces languish in the corner.
the garage doors are quiet and gaping like observant militia and
nestled in the shelving on the wall are browning gasoline cans
half empty and waiting for spring.
the cigarette butts in the ashtray are standing at odd angles
as if having maintained their positions at the conclusion of an interpretive dance
crumpled and embellishing the romance of their fate.
the metal structure of the withdrawing mechanism bends smoothly and decisively
each moment hanging with the threat of animation.
it is winter and the cool light slouches in
bordering the garage doors in soft clumps.
the naked bulb buzzes like a luminescent bee
hanging in midflight
hovering callously in the face of the
light switch.

I grew up in Chatham, Ontario until I was 18 and I was whisked away to the “big city” of London to pursue my undergraduate degree in Creative Writing, English Language and Literature, and Comparative Literature and Culture, which I hope to obtain this year. I have a Mom, Dad, younger sister, and Boxer named Rocky.

I can probably claim one of the oddest collection of jobs of my peers: babysitter, corn detasseler, youth soccer referee, pickle grader, residence tour guide, parking enforcement officer, and shoe inspector. I also have a collection of quirky hobbies including but not limited to: piano playing, pole dancing, LARPing, watching anime, backcountry hiking, camping, long distance running, reading, and obviously writing. This allows me a wide berth of experience to write poetry about.

While my first love was prose, poetry certainly made for a sexy mistress when I truly discovered it for myself in university. While I’m famous for my 18+ activist/spoken word poetry, I’m also interested in experimental poetry, imagist poetry, language poetry, and nature poetry. My aspiration in life is write approachable poetry and prose that gets people to think about the world at large.
​I grew up in Chatham, Ontario until I was 18 and I was whisked away to the “big city” of London to pursue my undergraduate degree in Creative Writing, English Language and Literature, and Comparative Literature and Culture, which I hope to obtain this year. I have a Mom, Dad, younger sister, and Boxer named Rocky.

Poetry After a Hard Day's Work

​Open mic night is the Baileys
in your coffee in the morning
after unzipping the door
to the lingering smell of evergreens
while you’re still wearing pajamas
and no bra.

Spoken word is the red wine left
in your mind and at the end of the most
romantic date of your life in
that gown the little girl in you dreamed
of…and you didn’t have to pay
for a thing.

Poetry slams are the vodka,
cranberry, and lime (or the whiskey
or bourbon for you sensitive types)
in the middle of a night club
where you’re up on a platform
and all eyes are on
your bare legs, sculpted
ass, nice rack, perfect hair
and they’re cheering on that
slow burn that hits you
like a wallop so you don’t
know which way is up.

Poetry after a hard day’s work.