You can move the timer button to the following positions:
0:00 Opening music: Carly Thomas and Pat Dryburgh
0:12 Lee Johnson on the motivations for writing poetry and the adventure of living.
4:04 Susan McCaslin on getting out in nature and paying attention to it, as the fund of wisdom and poetry for her.
7:06 Lee Johnson recites his poem called "Meeting Place" about humanity in nature.

You can click on the timestamps below:
00:09 Introduction by Dawna Perry
00:53 Introduction by Susan Downe
05:41 Penn Kemp
23:14 Q&A with Penn Kemp
23:53 Describes how she writes sound poems.
25:53 Sound poetry is not singing. How she began creating sound poetry.
27:45 About collaboration with visual artists.
28:50 Her writing discipline.
You can click on the timestamps below:
00:09 Introduction by Stan Burfield
07:19 Laurence Hutchman
36:02 Q&A with Laurence Hutchman
36:50 A comprehensive discussion of the different kinds of rhyme in poetry.
41:50 Advise to a young poet on how not to lose one's creativity at university, and its value in teaching discipline.
44:20 The French influence in New Brunswick and the excitement of learning a new language and a new culture.
Dec. 4th 2013, featuring M. NourbeSe Philip
This video recorded at London Open Mic Poetry Night at the Mykonos Restaurant in London, Ontario includes Philip's 20-minute read of poems from her latest book, Zong!, followed by a Q&A, which was then followed by another two poems, the result of interest caused by her answers to audience questions.
Biography of M. NourbeSe Philip
Interview and Poems: M. NourbeSe Philip

Open Mic Poets
This video includes half of the open mic poets at the Dec. 4th London Open Mic Poetry Night at London's Mykonos Restaurant. The other poets either didn't wish to be videotaped or failed to check the yes box on the reader's list. (The videographer must have consent.)  You can slide the video to the particular time of the poet you want to hear:
Jennifer Chesnut  0:00
Frank Beltrano  5:02
Kevin Heslop  9:45
Kevin Austin  13:00
Andrew Iwaniw  15:08
Stan Burfield  16:26
John Nyman  17:26

The sound quality dropped a bit in the middle of the video because of the rain on the terrace room Special effects. 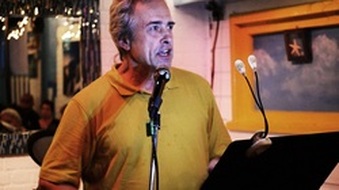 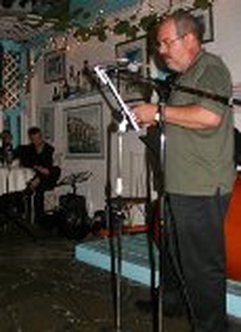 In September we had a great poetry reading. Frank Beltrano, the featured poet, was introduced by Ola Nowosad. Following a decision of our Committee, this event was the first one we filmed. For me, it was the first time using the video capabilities of my Nikon SLR camera and found, to my surprise, that it behaved very differently from all other video cameras I had used in the past. The crash reading I had done the night before and during that day were not enough to avoid mistakes during the filming of our event.  I made several mistakes that were extremely costly and painful. Unfortunately I screwed up the first segment, the one where Ola Nowosad introduced Frank. Everything was going quite well until for some reason I decided to change the focus, but because of the small screen of the camera I didn't realize the image had become blurry until I started editing. So that's the reason you won't see the film of Frank's introduction.  Then I made several other mistakes which I will not tell you about in detail or these notes would take many pages. Let me just say that I regret the fact that Frank's reading was cut short because I only had good copy of his second and third poems. Sorry. Finally, I would like to thank Andreas Gripp, who on that evening read with such conviction and confidence, for accepting that we publish the segment which, against his instructions, I filmed by mistake. In this case, we could say it was a good mistake. On the part of all of us at London Open Mic Poetry Night, I want to thank everyone of the readers who accepted to be filmed and also promise that in the future there will be fewer mistakes. At least that is the plan.     Erik